According to Sky News property investor Patron has asked financial advisory firm Lazard to oversee an auction of the chain. One of Europe’s largest providers of premium hostel accommodation is being touted for sale in a deal valuing it at more than £400 million. Sky News reports that Generator Hostels’ controlling shareholder, Patron Capital, has asked investment bankers at Lazard to oversee an auction of the business. Generator has a presence in most of Europe’s biggest cities, including Barcelona, London’s Bloomsbury, Paris and Rome‎. It has tapped into a growing demand among younger travellers for branded accommodation which competes with boutique and 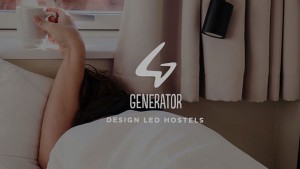 lifestyle hotel operators. Sources said the proposed sale was being examined after a number of unsolicited takeover approaches‎ from unidentified international investors. Patron, a serial backer of companies with property as an underlying asset, originally invested in Generator in 2007, providing a platform for the company to quadruple its portfolio to eight hostels within six years.

It is now targeting 20 hostels containing at least 12,500 beds by the end of 2018, with a further 3,000 beds in its development ‎pipeline. Insiders said it would announce on ‎Tuesday the appointment of Michelle Flagg, a hospitality industry executive, to spearhead a push into North America beyond a site in Miami scheduled to open next year. Generator’s ongoing international expansion ‎reflects a conviction among its management and shareholders that its target demographic is poorly served by existing hostel operators.

Hostels are attractive investments because they carry much lower development costs than traditional hotels, and are seeing average annual growth of as much as 8%. A spokesman for Generator declined to comment on Monday.