How Edinburgh is maximising revenue per available bed (RevPAB)

Finding the precarious balance between driving occupancy and driving rate can be a hostelier’s white whale. Not infrequently, markets will drop rate to drive bed sales. Edinburgh has taken a different approach: the market has increased rate despite decreasing occupancy, resulting in higher revenue per available bed (RevPAB). 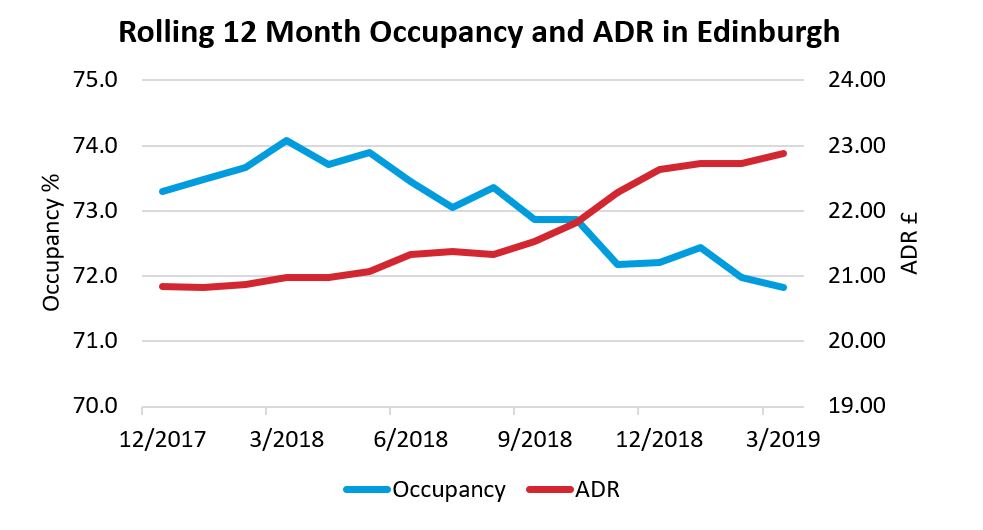 ADR has grown in excess of occupancy’s decline for the past four months, suggesting that this phenomenon may be a trend for the market’s hostels.

A look at Edinburgh hotels

Economy and midscale class hotels in Edinburgh have experienced similar declines in occupancy over the past four months, falling 2.4% year-over-year for the 12 months ending March 2019. Unlike hostels, however, hotel rate fell along with occupancy, losing 0.3% compared to March 2018. Hotel revenue per available room has fallen year-over-year for the past four months, as sluggish ADR growth was unable to offset the loss in occupancy.

Part of the hotel slump could be caused by supply growth. As of March 2019, economy and midscale class hotel room supply grew 5.5% year-over-year, which undoubtedly put pressure on occupancy. This would suggest that the market’s hostels are intentionally prioritising ADR growth over occupancy growth.

Prioritising rate may not be the most common hostelier strategy, but it appears to be paying off in Edinburgh.