Germany is the birthplace of hostels, so it should be no surprise that its capitol city, Berlin, is a haven for backpackers, with roughly 100 hostels and some of the best-known. Economy and midscale hotels provide competition, accounting for 44% of Berlin’s 73,000 hotel rooms.

Berlin hostels slightly underperform when compared to other European cities. The market averaged 72.4% occupancy over the past six months, close to Edinburgh occupancy but more than seven percentage points below Amsterdam and London. Rates appear more equitable, with Amsterdam standing head and shoulders above the other three markets. 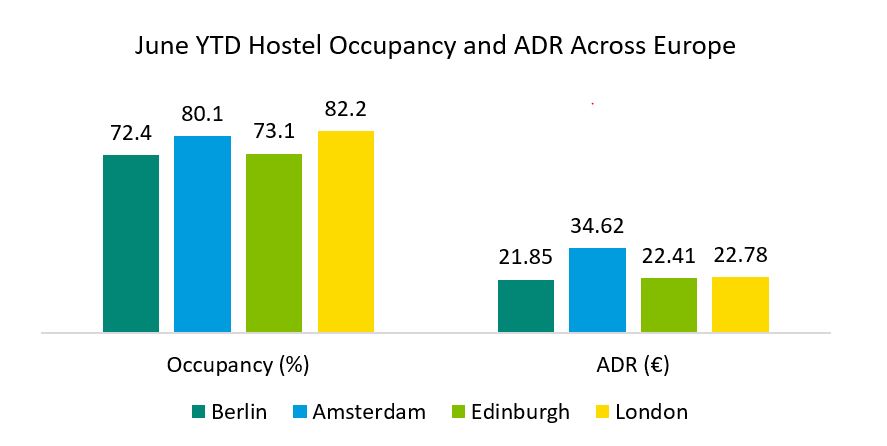 Fortunately for Berlin, this trend appears set to change. Growth in each of Berlin’s key performance indicators has been overwhelmingly positive, with occupancy increasing a modest 1.5% and ADR lifting a stellar 5.8% from 2018. This translated to RevPAB growth of 7.4% year-over-year.

Only London has reported similar gains in performance year-over-year. The UK capital city’s RevPAB increased 7.9% and TrevPAB grew 9.0%. Notably, TrevPAB grows faster in London than in Berlin; London hosteliers may be quicker to adjust their auxiliary service pricing.

Strong growth appears to be a market-wide phenomenon: economy and midscale hotels in Berlin grew occupancy 5.6% and rate 4.0% from June 2018, leading to a jump in revenue per available room of 9.8%. (STR tracks hotels on a per-room basis).

The high occupancy growth led to hotel occupancy of 75.9% year-to-date, nearly four percentage points higher than hostel occupancy over the same time period. Fortunately for hostels, economy and midscale hotels in Berlin are significantly more expensive, with year-to-date ADR of €71.21.

While other hostel markets may be struggling with year-over-year growth in the face of local macroeconomic factors, Berlin hostels are sailing through 2019. The market has increased rate almost 6.0% from this time last year while still driving occupancy nearly 2.0%. Similar growth in the economy and midscale class hotel segment suggests the market may be growing in popularity with the budget travel community.