2019 was a fairly tumultuous year for the European hostel markets that STR tracks. Performance varied widely across markets, as markets battled tourist troubles, worried about Brexit or ended the year with seemingly no concerns.

Year in review
London hostels led the four markets in occupancy, filling more than eight of every 10 beds in 2019, 4.1 percentage points higher than closest contender Amsterdam. While such high occupancy is impressive, it is par for the course in London accommodations. Midscale and economy class hotels in London exhibited similarly strong occupancy, ending 2019 at 84.9%.

Despite lagging London in occupancy, Amsterdam hostels enjoyed the highest rate of the four markets in 2019, earning a staggering €35 per bed, over €11 more than any other hostel market. These high rates may be a function of supply: the city put a moratorium on new accommodations in the city center. Limited supply growth in a high demand market can lead to strong pricing power for market accommodations.

Berlin hostels trailed the other three markets in every KPI, finishing 2019 with €20 in Total Revenue per Available Bed (TrevPAB). That said, the birth country of hosteling recorded the largest gains in ADR for the year while London and Amsterdam posted muted growth and Edinburgh ended with a decrease. 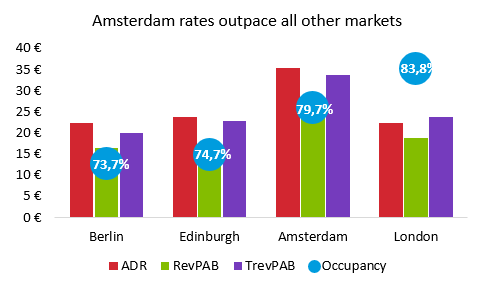 Amsterdam hostels also saw the greatest impact of Other Revenue. The market’s TrevPAB finished 2019 €5.43 higher than Revenue per Available Bed (RevPAB). Edinburgh closely trailed, earning an additional €5.22 in TrevPAB than in RevPAB. Berlin saw the smallest gap, at just €3.61, suggesting that hostels in the German capital may not offer as many amenities as those in the Netherlands capital.

While Berlin trailed the other three hostel markets in occupancy and rate, they more than made up for that in year-over-year growth. Despite a minor loss in occupancy, Berlin hostel revenue metrics grew more than any other market in 2019, adding 4.5% to ADR and 4.1% to TrevPAB from 2018.

Edinburgh, on the other hand, suffered through 2019, losing momentum year-over-year in every KPI. Fortunately for the Scottish capital, Other Revenue (sort of) saved the day: Despite nearly 2% losses in both occupancy and rate, TrevPAB only declined by 0.4%, which we can optimistically call a flat performance. 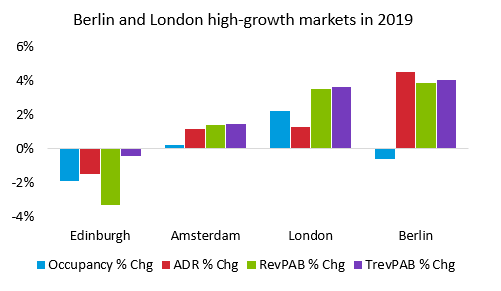 Amsterdam rounded out 2019 with modest growth, which should be unsurprising given the measures the city has taken to curb over-tourism. London hostels meanwhile overcame the back-and-forth nature of Brexit in 2019, adding a respectable 2.2% to occupancy in an already very high occupancy market.

While STR does not produce hostel forecasts, hotel forecasts can provide some insight into underlying market drivers and help set expectations for 2020.

STR’s hotel projections call for ADR to be the primary growth driver across all four markets in 2020, as anemic occupancy growth, caused by high supply growth in some markets and muted demand growth in others, continues across Europe. Edinburgh in particular will continue to experience the effects of high hotel supply growth, which may steal some hostel demand. With its vibrant nightlife and rates lower relative to other European cities, Berlin should anticipate slowed – but still positive – 2020 growth in comparison to the past few years due to the general slowdown in global demand.

The sheer popularity of both Amsterdam and London as travel destinations overlaid with the ongoing political climate in both markets make them the most interesting markets to watch moving through 2020. Both could experience the impacts of the UK’s recent exit from the European Union, while 2020 heralds the introduction of €3.00 per traveler flat fee tourist tax in Amsterdam, which may over-impact budget accommodations.