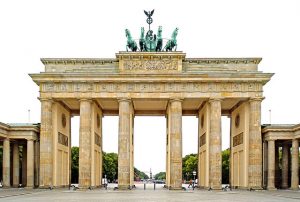 Berlin’s City Hostel appears at first glance to be a simple, cheap option for staying in the German capital. It’s not far from iconic landmarks such as the Brandenburg Gate, and while online reviews complain of dodgy WiFi and broken windows, the hostel offers “good value for your money,” as one traveler recently remarked. A bed in a mixed six-person dorm costs only about $20.

Visitors may have wondered about the high fence outside of their accommodations — or the gigantic North Korean flag next to the building — but probably didn’t worry too much about it.

But what they almost certainly didn’t know is that their stay at City Hostel indirectly benefited the regime of Kim Jong Un, making unsuspecting tourists into involuntary financiers of a notorious totalitarian state. The property is owned by the Kim regime, which received it as a gift from the communist government of the former East Germany. North Korea does not operate the business itself, but it receives tens of thousands of dollars every year in rent from both the hostel and a conference center there.

That may soon change. The current German government is not amused by the lucrative North Korean real estate business. On Wednesday, it announced plans to shut down the hostel and the conference center. Britain and Germany have recently cracked down on several other companies associated with the North Korean regime, reacting to mounting concerns over an escalation of tensions between the U.S. and North Korea.

“The constant threatening gestures by the North Korean government are worrying us. We will increase the pressure to bring North Korea back to the negotiating table,” said Markus Ederer, the state secretary of Germany’s Federal Foreign Office.

“It is particularly important that we dry out the sources of funding for the nuclear weapons program,” said Ederer, drawing a direct connection between revenue from the Berlin youth hostel and North Korea’s efforts to advance its nuclear weapons capabilities.

The German government’s decision was first reported by Munich’s Süddeutsche Zeitung newspaper on Wednesday. It follows a U.N. resolution passed last November and ratified by the E.U. earlier this year, which states that members should ban North Korea from using diplomatic real estate as a revenue source.

Both the hostel owner and the North Korean embassy in Berlin have been notified by authorities that the rental agreement violates international law, but a spokesman for the German Foreign Ministry declined to say when exactly the hostel will have to shut down.

The North Korean embassy, which is located in the former diplomatic district of East Berlin, was mostly built in the early 1970s. Parts of the embassy were vacated as relations between Germany and North Korea soured following Germany’s reunification in 1990. Years later, in the early 2000s, a low-budget hostel and a conference center were opened in what used to be the embassy’s main building, turning the property into a revenue source for the regime in Pyongyang.

In 2014, a journalist from German newspaper Die Welt attempted to verify rumors that the hostel was still connected through a tunnel to the fenced-off embassy compound, but found no evidence. Despite the media coverage at the time, the hostel’s rental agreement sparked little outrage, even as other North Korean business practices in Europe came under growing scrutiny.

With Wednesday’s announcement, German authorities are trying to shut down what is believed to be North Korea’s last official revenue source in the country. But for now, according to booking websites, the hostel is sold out on many nights over the coming months — international intrigue and WiFi included.